The forecast says baste your hide and prepare to be cooked.

When I arrived at the launch site there was a truck parked there, but it wasn’t Drew Blair’s truck. A man emerged from the woods dragging a kayak from the direction of the river, his headlight beam a cloud of insects.

“This isn’t the start I was expecting.”

My second thought was “Where the hell is Drew?” A short conversation later, and I said goodbye to Mitch, the woodsman, who gave up on the launch site. “That’s a rough launch” he said. I offered to help Mitch because I knew, deep in my heart, that Drew was asleep and I wasn’t going to make it alone. He always sleeps in on tournament day. Sure enough, a phone call confirmed it. Thankfully, he lives nearby. Mitch declined.

I waited in the dark for a bit. There wasn’t any morning breeze. I wondered if there was any air. I hoped to hide from the bugs in the darkness, but they found me. I was standing still but I was sweating. The sun would rise in 30 minutes. Drew, half asleep, rolled up and tried to use his Jedi mind powers to make the Hobie slide off his truck.

I’ve launched from difficult locations. This one ranked near the top of the list. The weeds were waist high, ruts in the abandoned road were knee deep and the drop from the bank to the water was actually two separate drops that added up to a Cubist painting. After launching, I realized that one of my rods left one of my lures somewhere in a tree branch behind us.

This isn’t an essay about how good I am at my favorite sport. It’s about a hot river and a cold bite. It’s about the risks I take, the decisions I make and the company I keep. It’s about admitting nature doesn’t care about your fishing plan – or any plan for that matter.

I’ll share the water with almost anyone. I like the company and conversation. And I particularly enjoy sharing a spot with a good friend. In this case, neither of us had ever fished the spot, not once. Drew had scouted it upon my request. He sent photos. We made a plan and took a chance.

We launched. The early result was disastrous. We had found a spot with fish, but I proceeded to lose 5 of my first 6 bass. In fact, I lost a good bass on my first cast with the very same rod that left a lure in that tree back there. I had tied the same lure on in a different color, but I might as well have thrown that new lure into the trees, too. Drew had a different experience, somewhat: he was catching White Bass, Striped Bass and Crappie. We were 15 feet apart: I was on the bass and losing them and he was on the wrong species and landing them. All of them.

We settled down and finally landed one bass each, a bit farther downstream. Another kayaker showed up. It was Derrick. We all fished together for a bit, missing a few bites, and I landed my second fish. 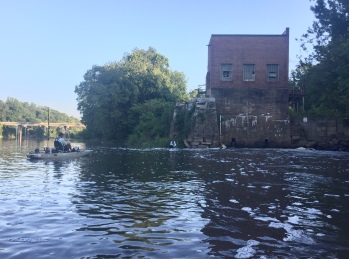 “How’s the bite upstream?” I asked, casting an eye toward the angle of the sun.

“I had some small bites. Missed ‘em,” he replied.

There was more small talk, discussion of a general variety. I decided to paddle up stream to check it out. Rather than follow the main channel, I found a secondary channel. I noticed a small outlet, about 4 feet wide and only 1 foot deep, that I could get through. Before paddling through, something said “Take a cast.” Moments later, I had my third fish, another small one, but a keeper. Why did I make that cast? It was a choke point, with an ambush spot and a light current. I didn’t think that in any way. I just made the cast. I went through and paused.

What had happened with my previous two fish? I caught them on different lures: a topwater lure and a small crankbait. But both were on the calm side of a current line, as this one had been. Two of the current lines were weak, another was strong. It didn’t matter: moving water was the key.

I fished through, up to the rapids. I got out, climbed a hill to survey the large and inaccessible dam, then left the area. I fished my way back without luck. A boat was parked in our original spot, so I fished downstream, with Drew not far behind, lazily drifting down the opposite shore. It was the halfway point, the sun was high and a hot wind was brewing. I was beginning to feel the heat.

Second Guessing: “I should go home.”

Doubt. “Should I stay here or move on?”

Regret. “I should have gone to that other ramp.”

Horror: “Those early fish I lost are gonna cost me.”

Morbid Curiosity: “Let me check the leaderboard and cry.”

I found an abandoned railroad bridge pylon. It was in the shade, and I parked there to cool off. What happened to this bridge? Was it swept away? Exploded? Abandoned? Was there structure left nearby, underwater? Should I bother to check?

There aren’t any damn fish here.

There he is, by the second pylon. I’ll pedal over and check on him. 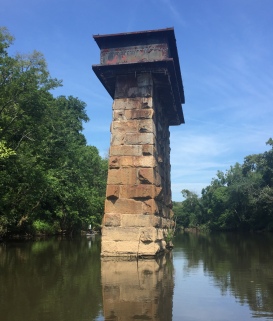 I stopped at the pylon. It was beginning to look like a monument to failure and bad ideas, with our names inscribed at the top – a tombstone. Maybe it was just an old structure. Maybe there was a fish sitting behind it.

He was fishing slow, working around a laydown. We started heading back, or at least I did, when I saw a trickle of water along the high bank, falling through a rut.

“You seen any creeks on this river yet?”

He was in a mood now. Creeks. Forget Drew. Look at your phone. Map. Creek.

There’s a creek. But it’s a mile past where I was, 20 minutes ago. Should I risk it?

“Drew I found a creek follow me damn it.”

We were into the final quarter of competition time. The worst part, the hottest part, the grind your teeth and hope they make water part.

When I reached the creek mouth, it was smaller than I had hoped for and I was immediately swarmed by sweat bees. I made a cast through the buzzing cloud with a crankbait, right to the corner of the creek mouth. Fish number 4 was on the line.

Moving water, calm side of the current.

“Drew get down here damn it!”

He was still far back. I marked some more fish in the area, and had one bite, but I was stuck on four fish with an hour left. I should just leave.

“Drew, fish the creek and get a limit. I’m heading back to the launch.”

There were 45 minutes left in the tournament when I arrived back at the launch location. I wasn’t marking fish, but I kept casting to where I had made my earlier casts in the morning. Nothing. After fifteen minutes I turned to check on Drew. He’s a few minutes away. I’ll start hurling my gear up on the back.

I side-armed a cast, slightly behind me, to the edge of the current. I turned the reel. I cranked the reel once and fish 5 was on. I didn’t even think of where I was casting. It was as mindless a cast as I ever made. Somehow, it landed right where the last small bass in the Cape Fear River was waiting for an afternoon snack.

I had caught a limit of five fish. It was a limit to mock and despise, a measly 63.25”. It was the kind of limit to be ashamed of. I uploaded that last fish to TourneyX and thought “I’m a fool.”

Drew had arrived in the meantime. A few casts later, I lost my lure on a snag and announced I was finished. We began the long, hot painful trek back to the vehicles. Along the way, I found the lure I lost that morning. It had given up and fallen from the tree to the ground like a shriveled apple. It was that hot.

I’ve had some inspired moments during my career as a tournament fisherman. I’ve let my kids pick spots for me, and they paid off. I’ve relied on experience and wits and the elements to help me find fish. I’ve won money and fished lakes I never dreamed of fishing.

I’ve also made some really, really bad decisions and mistakes. I lost winning fish, I let a bad phone signal distract me from a good bite, I left a PFD partly unzipped and once, unbelievably, I left my fly unzipped in my uploaded catch photos – at the FLW Cup.

I don’t know how to rank this particular river event. I’d like to say “Determination,” but I can’t. “Dehydration induced hallucination” seems more accurate.

In the end, I finished in the money for the event – 3rd place, to be exact. The last money spot. How that happened is beyond me. On any other day that sad little limit wouldn’t win you a fortune cookie.

There’s no way to account for that sort of result. Luck, listening to your gut, reading the water, never give up – those are all clichés we use to explain away bad decisions. We try to make them seem like good decisions once the standings are in and you win a check.

As we were loading our gear, I snapped a rod.

I’d like to say I had a plan, or someone else did, or that I’m just that good.  Sometimes you can’t say that. Sometimes, after dragging your kayak uphill and listen to your buddy curse you for waking him up to fish, you just have to admit the truth: it was all a bad idea, but somehow it worked out.

Was it worth it? I don’t know. The advancing years make me wonder. Sometimes at the store, cashiers ring me up with the senior citizen discount even though my age still begins with the number 4. The tires are showing some threads. There won’t be many more days like this one.

But I’m not sure about that, either.