Here is a well illustrated and informative post from Isaac’s Fishing Corner, a fishing page I follow. In it Isaac describes fly fishing for Bowfin (note his use of larger flies and a strong leader, but also a lighter 5 weight fly rod). There is not much available about fly fishing for Bowfin in the fishing literature so this was a welcome sight from Bowfin Country.

I can clearly remember the first time I ever saw a Bowfin: I was fishing a little irrigation ditch that ran through some corn fields when this strange looking fish slowly surfaced and gulped some air before disappearing back into the muddy water. As soon as I saw that fish I knew a new obsession […] 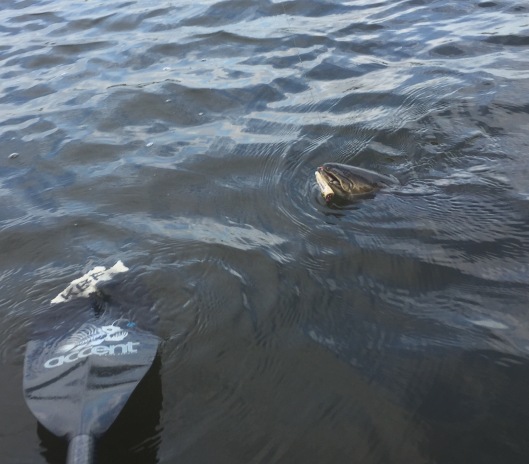 The latest issue of Outdoor Life magazine (April 2017) contains a short feature about Bowfin fishing. The article is largely based on an interview with yours truly. For some reason, the editors chose to place it on a page entitled “Ugly Fish.” Look at the Bowfin I am holding in the photo – it’s a beauty. Nonetheless, it’s always good to grab some positive press for this under-rated and misunderstood native species, and I am particularly honored to be included in a magazine that I have read since I was a child. Thank you, Outdoor Life!

Here is a link to an excellent recent article written by Joe Cermele, Fishing Editor at Field & Stream magazine. The quote below gets my vote as the early favorite for Bowfin (a.k.a. dogfish) quote of the year. Why? Because if native species like the Bowfin weren’t in our lakes the fishing for other species would not be as good as it is.

“The funny thing is that in a fishing culture so worried about invasive species and preserving native fish, the bowfin is often falsely touted as a bad guy. The truth is that they were around millions of years before every gamefish we love. They have remained largely unchanged since the time of the dinosaurs, and I only had to catch one to decide I’d take the fight of a dogfish over that of a bass any day. I’m not alone.”

Here is the link to the full article:

Here is a rare Fossil Friday post: on Sept. 21, 2008, the Pittsburgh Tribune Review printed an article about a Bowfin that was caught in the Allegheny River in Pittsburgh, PA. The newspaper still ran a print edition then. Hence, the digital copy below is the fossil, a crude impression left by the extinct print copy. The print edition also ran the attached photograph; I include it here for historical reasons. That photo is everywhere now, and I want people to know where it first appeared in print.

The article’s history: it began when  Bob Frye, the outdoors writer for the “Trib,” contacted Chuck “BAGman” Meyer at the old Bowfin Anglers group site. Chuck sent Bob my way, and Bob and I had a nice long chat. We spent a good part of the time talking about Myron Cope and the Steelers.

Bob somehow managed to turn my ramble into a great article – Bob is a professional journalist, after all. Looking back on it now, I was happy to draw some attention to my favorite fish and invite some folks into Bowfin Country.

A side note: the tackle shop mentioned in the article apparently had so many requests for the mount that they took it down, or so I was told by a friend who went there.

Here is the article, for your paleontological reading pleasure:

Battling an angry, powerful fish from a kayak can be a nerve-rattling experience. Anglers must first contend with the thrill of the fight and the steps required to land the fish. Those steps include adjusting the drag setting on the reel, preventing the fish from running into and being wrapped on underwater structure, and any number of other movements (such as holding the rod in one hand while using a landing net with the other). In some cases, a large fish can haul a kayak into dangerous water.

Small, less bruising fishes such as Bluegill, Crappie or White Bass may not prove a great test of strength or kayak management but the motions required to land the fish remain the same. My topic here is how larger sport fishes – Alligator Gar, Muskellunge, Steelhead, giant Largemouth Bass or Bowfin – amplify the mechanics of landing a big, angry fish by requiring added strength as well as attention to detail. And all these movements are  amplified, sometimes to deafening volume, by a tangible risk of physical harm to the angler and the fish.

What will happen when I pull this large fish into the kayak, and its powerful jaws, teeth or tail are in my lap?

END_OF_DOCUMENT_TOKEN_TO_BE_REPLACED

The latest issue of KBF magazine mentions the Bowfin in two separate articles and quotes yours truly in one of them. The one in which I am quoted is a feature story by angler Drew Haerer on the topic of fishing for primitive fishes. The article “The Forgotten” (p. 96-99) also features a photo I took of a friend and fellow angler while we fished for Bowfin at Core Creek, N.C., in 2012. You can read it free here:
https://issuu.com/chrispayne94/docs/spring_2016_kbfmag